Buckland in a prehistoric hyena den

At a 1835 scientific society meeting, an amusing scene erupted between two scientists who were arguing over the alleged age of bones. William Buckland reportedly gave an entire lecture with the bone of a cave bear hanging from his tongue. Subsequently, another scientist (Philip Schmerling) was humiliated in front of the audience when he could not do the same–his bones did not stick to his tongue like they were supposed to. So, what was happening at this meeting and why were scientists sticking bones on their tongues?!

At that time, scientists were having difficulty establishing the age of bones, especially bones that had been found in caves. Lacking the dating methods we have today, they were faced with the difficult depositional environments that make up caves. The problem was intensified by the fact that bones were often not found by scientists, but instead by quarry workers who removed the bones from their stratigraphic context, losing valuable information as the bones were no longer in situ. 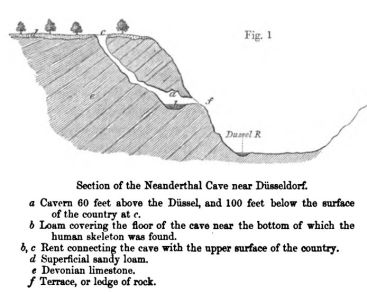 Lyell’s drawing of the Neanderthal cave, from Antiquity of Man, 1863.

The Problem of Antiquity

Imagine you are living in the 1830s. You find a human looking bone–maybe a piece of a skull, or part of a leg–and you need to determine whether this is a recent human that was buried in the cave, or if it is something much older. How would you determine it’s age? Faced with this problem, scientists turned to a variety of methods in order to decide how old the bones might be. The question at stake was are these bones old and fossilized, or not? This problem unfolded in interesting ways around the early study of hominin fossils, particularly the Neandertals.

In addition to attempting to understand the sediments of the caves, scientists considered a number of features of the fossils themselves in order to determine their antiquity. These features included the color of the bones, the bones’ association with other animals’ bones, and interestingly, whether or not the bones could stick to the tongue.

The idea that older, fossilized bones stuck to the tongue better than younger bones had been noted by the German naturalist Johann Friedrich Blumenbach in the early 19th century. By the 1830’s, this test of fossilization was being called into question, yet it persisted in publications on fossils well into the 1860’s.

The confrontation that occurred between Schmerling and Buckland in 1835 was over this very matter. Buckland argued that Schmerling had simply found some recent human bones, arguing that if they were indeed fossils, he would be able to deliver his presentation with the bones hanging from his tongue. Schmerling’s bones did not stick, and it took over 25 years for scientists to recognize that he had discovered important fossils (one of which was a Neandertal child!). Unfortunately for Schmerling, he wasn’t vindicated until after his death.

Neanderthals Adhering to the Tongue

The famous fossils discovered in 1856 that became known as the original Neanderthal did, in fact, adhere to the tongue, according to Charles Lyell in his 1863 Geological Evidences for the Antiquity of Man and Thomas H. Huxley in his Evidences as for Man’s Place in Nature. Lyell said: “The skull and bones, moreover, of the Neanderthal skeleton had lost so much of their animal matter as to adhere strongly to the tongue, agreeing in this respect with the ordinary condition of fossil remains of the Pleistocene period.”

This was especially important in the early study of the Neandertal, because the fossils looked remarkably human, leading many to wonder if they were just some recent murder victim or diseased idiot who died in a cave. Therefore, the determination of their age potentially added an immense amount of information on whether these fossils provided a snapshot of the evolution of man, or if they simply resembled a recent, barbarous race of Europeans.

We can see from the quotes that the adhering to the tongue method determined, for these scientists, that the Neandertal bones were indeed old. This has, of course, implications for how the fossils were understood by naturalists. What might have been different if the fossils did not adhere to the tongue (as some fossils don’t, and some recent bones do)?

I think this method of Victorian analysis of fossils is an interesting tactic, and I hope to explore how this method emerged and faded away further in the near future. Additionally, this example of Lyell and Buckland weighing in on debates with Schmerling, Huxley, and others, provides an interesting intersection of geologists and those who would become paleoanthropologists, which is worth further exploring. Within whose domain is the study of fossils? And how did they go about studying fossils? These are just some of the things I think about!

3 thoughts on “Does it Adhere to the Tongue? How to Recognize a Fossil in 1835”