An exciting fossil discovery of a possible early member of the Homo genus was announced this week through Science. Summaries of the fossil, which is a jawbone dating back to 2.8 million years ago, are all over the web (my personal favorite being a video and press release through ASU). However, the fossil publication was only one of three published together that cover larger questions about the site, from the geology to the possible species diversity of the genus. This bombardment of three papers, I feel, have resulted in somewhat fuzzy reporting on the fossil. Therefore, I decided to write a piece focused on the fossil itself, outlining what we know so far about specimen LD 350-1, or, as I’m calling it, the Ledi jaw. Let’s start with the basics, LD 350-1 is half of a lower jaw that includes five teeth. Here’s what we know: 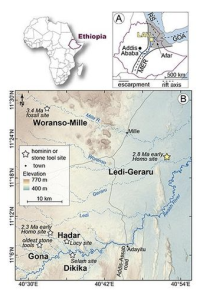 1. It was found near the Lucy site. Generally speaking, both the Ledi jaw and Lucy were found in the Afar region of Ethiopia. This general area also revealed the Dikika baby in 2000. Clearly, this is a rich area of research for hominin fossils!

3. It moves the Homo genus back in time. Before this discovery, the oldest fossil attributed to the genus Homo dated to 2.3 million years old. This find moves the beginnings of the Homo lineage back almost half a million years, helping to fill in a huge gap in the fossil record.

3. It’s transitional between Australopiths and later Homo. Australopithecus groups such as Lucy’s species, Australopithecus afarensis, lived approximately from 4 million to 2 million years ago, and looked very apelike. The Ledi jaw has traits we see in Australopithecines such as a lack of a defined chin. Also, the fossil has traits that look more human-like, as we see in later Homo, such as slim molars, symmetrical premolars and an evenly proportioned jaw. This mixture of primitive and derived traits suggests that it might be a link between these two groups.

Area where the fossil was found

NPR summed this up well:

“Here’s why that’s a big deal: There’s a big gap in human history that has long puzzled scientists. It starts 3 million years ago, in east Africa. The place was home to a variety of 4-foot-tall, apelike creatures called Australopithecus — the famous Lucy is the best known. Over the next 500,000 years, these creatures disappeared. Then our genus, Homo, appears in Africa — about 2 million years ago. Scientists believe that sometime and somewhere during that million-year gap, Homo evolved from Australopithecus. But there hasn’t been physical evidence of that transition; it’s a period that has turned up very few human-related fossils.”

1. Which species it belongs to. The team has refrained from assigning this specimen to a species just yet. They are, for the moment, just referring to it as LD 250-1 and maintaining that it does, indeed, belong to the genus Homo. Stay tuned.

2. More fossils from this individual, or is it really just a jaw bone? Thus far, the team has not confirmed that they found any other bits that could have possibly been from this same individual. They are, however, continuing to conduct fieldwork in this general area, so again: stay tuned!

So what? Well, I think paleoanthropologist Chris Stringer put it really well:  “These new studies leave us with an even more complex picture of early humans than we thought, and they challenge us to consider the very definition of what it is to be human. Are we defined by our small teeth and jaws, our large brain, our long legs, tool-making, or some combination of these traits?” Stay tuned on this and more exciting things happening in the field of paleoanthropology!